Since the murders of Samantha and Kimberley in March 2012, and the formation of this charity in 2014 there have been so many things going on.   Before the murders I had never given any thought to everything that goes on within a family after such a tragic event like murder.  No one can prepare a family for what goes on in respect of what surviving family members go through.   I myself received treatment for Post Traumatic Stress Disorder and the treatment lasted until the charity was started in 2013.   The Samantha Sykes Foundation was, during that dark period of my life and still is now, a welcome distraction.   The work we do gives me a goal and purpose to carry on.  Something I firmly believe in, something positive from such a huge negative.

Ahmad Otak was sentenced to thirty four years imprisonment before he can even be considered for parole,  that means he is not eligible for early release.  He cannot be released before March 11th 2046.  Unlike other prison terms,  someone on a fixed prison term can only be released when it is sanctioned by the residing  Home Secretary.

When we consider any sentence given it is often followed with, and we hear it said so many times,  that  “the family has a full life sentence”  ,  I always considered this statement a cliché,  but having being projected in to the position we now find ourselves in,  I now realise that it is anything but a cliché.

In an effort to explain why we believe that statement to be true we should consider the following events, all post the murders of Sami & Kim:    Following the murders of Sami & Kim we have had so many tragic family losses,  the first was my mother who refused treatment for cancer, she had lost the will to live, she spoke to me candidly about the loss of Sami and how she struggled to comprehend it, Samantha was murdered on the weekend of my mothers 80th birthday.  My mother died from her illness just four weeks after Ahmad Otak was sentenced, she passed away on New Years Eve 2012.  Following the loss of my mother  Samantha’s grandad David, following the sudden death of Samantha’s grandmother, and then the loss of Samantha became extremely withdrawn. Following the death of Samantha’s grandmother Sami spent time with her grandad supporting him and  the only time I saw him smile was when Sami was there with him. Following the murder(s)  David  deteriorated in to an alcoholic, and died through alcohol in a tragic fire at his home in September 2014.   After the loss of David was the loss of my youngest brother Ian, who was so instrumental in the formation of this charity, .  The emotional burden showed at times on Ian and it will have been a contributing factor to him taking his own life in October 2015.   After Ian had passed it then had a knock on effect within his own family, his loss was devastating to all of us, and in April this year Ian’s beautiful daughter Bethany, aged just 26 took her own life also, another massive loss.  I cannot possibly explain what all of those events have done to all of us as a family.    At this point in my life, particularly as a sceptic, it would not be a good time to ask if I believe there is a god.

I believe that all of the losses I have quoted,  are in some way a knock on from March 9th  2012, I do not believe they are the sole cause,  but certainly the knock on effect is evident.  A close friend says ” there is no such thing as coincidence”. 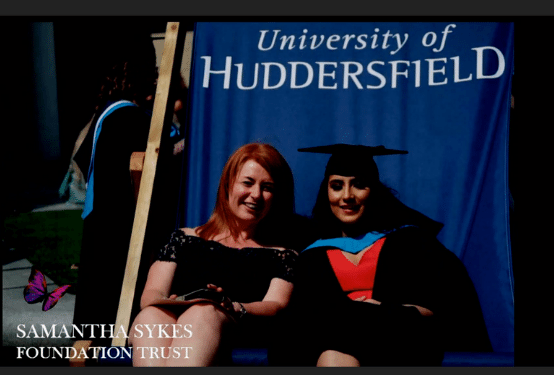 However through all of these losses  The Samantha Sykes Foundation Trust is still in growth, and as we enter the end of an educational year and the start of a new one I see hope and achievement.   The Samantha Sykes Foundation is the a bright light for me, it continues to grow and we continue to make such a positive difference in so many lives.  We continue to support and work with people at risk of, or victims of,  Child Sexual Exploitation.  In our work we also continue to help Care Leavers access further and higher education.   The results we are seeing with the Care Leavers, in particular,  is extremely visible and has shown remarkable results.

We have this year one young lady, Sanna Mahmood who, as a care leaver, has overcome so much difficulty in her own life, she has no family or family support, but she is so strong.   Sanna keeps telling us we are amazing,  but the truth is it is Sanna who is amazing, she is so determined and at some point I am sure she will share her experiences with others, who are in need of support,  which will certainly assure them they too can achieve.  This year Sanna surpassed  her own expectations and achieved a first in her Degree.  This year we have also had a young male care leaver , who we have supported for three years through university, this young man has just achieved a merit in his Masters.   Both have had direct funding from The Samantha Sykes Foundation, and we are proud of them both.

Myself and my wife Julie were so proud when Sanna invited us to go and see Sanna at her graduation day in July.  When we arrived she told us how she had not slept through excitement,  and you could really see how excited she was.  It was a breath of fresh air to see her, she was like a child in a sweet shop, you can see her beaming in the video below.

The people who are no longer with us,  from Sami & Kim in 2012 up to Beth in 2019 would be so proud of what this charity has achieved.  We, at The Samantha Sykes Foundation are all certain none of this could be done without such tremendous support from all of our sponsors and supporters.

On behalf of everyone at The Samantha Sykes Foundation Trust we all thank you all for that support.

As long as young people, either in the local authority care system or care leavers are disadvantaged and young people remain victims of child sexual exploitation, missed opportunities, injustice & violence persist. While this is happening, none of us can truly rest. It doesn’t take much to change a life. Get in touch with the Samantha Sykes Foundation today and start making the difference.