The Shepherds Arms, Horbury, Wakefield,  in conjunction with Smile Radio,  hosted a three-day music festival, to raise funds for The Samantha Sykes Foundation Trust.  Bands from around the region came along and supported the event,  which raised just over £2100.  The weather tried its best to dampen the event but in true spirit Richard & Richie, from Smile Radio,  whipped up the crowd and the hearty music goers were treated to some superb live music.  The band list was extensive and varied,  and thanks must go to them all.

The event opened with a live broadcast from Smile DJ’s Richard & a Little Bit of Chris,  followed by a solo set with Jez Howard from Snapp.   Over the next 2 days the music continued with local bands including, Little Britain,  Slaithwaite Quo,  The Latoya’s,  Elisha, John Cunliffe, Skanking Mick and finished with reggae band Mental Block.   Added to this one 15-year-old Sam Jones appeared as guest drummer with both Little Britain and Skanking Mick. Sam showed the appreciative crowd why he is now attracting the attention of local bands, many believe he is destined for bigger things. A DJ Set from 14 year old Lewis Laycock and a set from Nathan Downes from Smile Radio. A mention also needs to go out to solo artist Elisha,  who at 13 years old is a truly tremendous talent, her confidence grew as the crowd showed deserved appreciation to such a talent and let’s not forget Rachael Cottam and Bryony Duncan who came and did a couple of sets.

Shepherd’s Arms custodians Denise, Martin and all of the staff at the Shepherds Arms deserve enormous credit for hosting the event along with Smile Radio,  they never stopped working all weekend ensuring the event was a great success… despite the infamous British weather.

The festival could not have taken place without the support of many local businesses and everything from the fencing to the trailer was donated free of charge and we thank everyone who supported the 3 days.  There are too many people to mention, but you know who you are and we thank each and every one of you.  100% of the funds raised will go directly to young people in the Wakefield area, all of you and everyone who attend have made a difference. 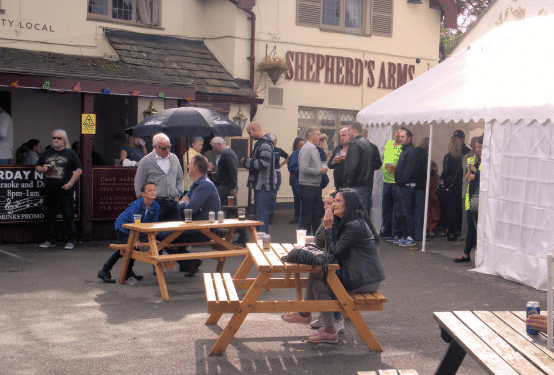 As long as young people, either in the local authority care system or care leavers are disadvantaged and young people remain victims of child sexual exploitation, missed opportunities, injustice & violence persist. While this is happening, none of us can truly rest. It doesn’t take much to change a life. Get in touch with the Samantha Sykes Foundation today and start making the difference.